This spring, Tété asked me to produce his next record with him. After having worked with him on his two previous records as a session musician, it was great to be more involved this time around. I’m first and foremost a great fan of Tété – he’s an incredible singer and writer, and he’s one of the few who has cracked the code of making the French language swing.

The record will be out in February and is called “Fauthentique”. The lyrics evolve around the concept of authenticity or the lack thereof in our age of fake news and digital manipulation of just about anything. The first single is “King Simili”, check it out! 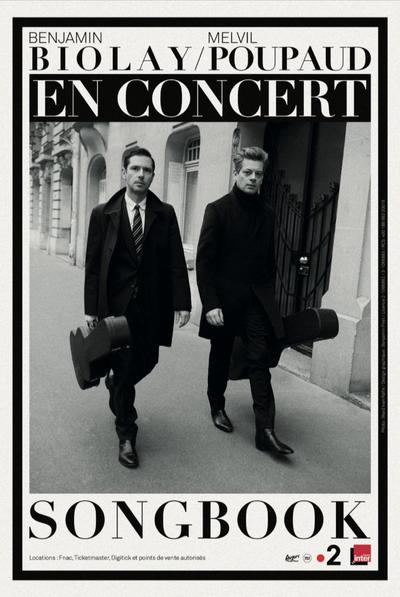 Happy and proud to be joining Benjamin Biolay and Melvil Poupaud for their SONGBOOK tour. We already played a few shows this summer, and the concert is a great journey into the deeper ends of Biolay’s repertoire, as well as songs that have influenced both these handsome gentlemen. It’s an intense acoustic run until the spring, you can check out the dates here.

It’s great to be playing with Benjamin Biolay again. Time has flown since I toured with him in 2007, and he’s become a bonafide star in France in the meantime. His stage presence and musicality were already very strong back then, but he’s even more charismatic these days – playing, singing, writing and performing better than ever.

I didn’t know Melvil before this tour, but he’s as charming, educated, talented and dedicated as you would expect from someone with as rich and consistently good a career.

We did some studio preproduction to prepare the tour, which Benjamin elegantly turned into a limited edition album that was recently released! No CDs for this one, only vinyl or streaming, click here: SONGBOOK

Hope to see you on the road!

New series of videos for the song “En Attendant” from Alain Chamfort’s album “Le Désordre des Choses” that I produced with him. The song title means “While Waiting”, and the videos illustrate Alain and other people waiting, in the style of Andy Warhol’s screen tests, or Gérard Courant’s Cinématon.

“Your general notion is that doing something nice makes you more confident. With ideas I often find that it’s the opposite. With every good idea you have, it actually becomes more difficult, because it’s so hard to repeat. Of course you can’t repeat… this is where the pain comes in, when I talk about not being good enough, being afraid that you’re out of ideas. You mesure yourself against a lucky moment. And this is really, really painful. You had this one spark three years ago, and then a client asks you to do it again. And you think: “How can I… I won the lottery then. How can you ask me to win the lottery? Under pressure? With a gun to my head?” And this is something, before I consciously thought about it, I just realised: “I’m miserable”. But when I realised that my fears threatened to take a toll on my work, I decided I had to deal with them. “Relax, don’t be so hard on yourself. I actually totally disagree. You have to practice and become better.” Every athlete, every musician practices every day. Why should it be different for artists?”